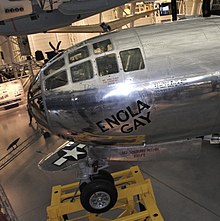 A video presentation about the Enola Gay's mission included interviews with the crew before and after the mission including mission pilot Col. Paul Tibbets. The exhibition text summarized the history and development of the Boeing B-29 fleet used in bombing raids against Japan.

Enola Gay, the B-29 bomber that was used by the United States on August 6, 1945, to drop an atomic bomb on Hiroshima, Japan, the first time the explosive device had been used on an enemy target. The aircraft was named after the mother of pilot Paul Warfield Tibbets, Jr. The B-29 (also called.